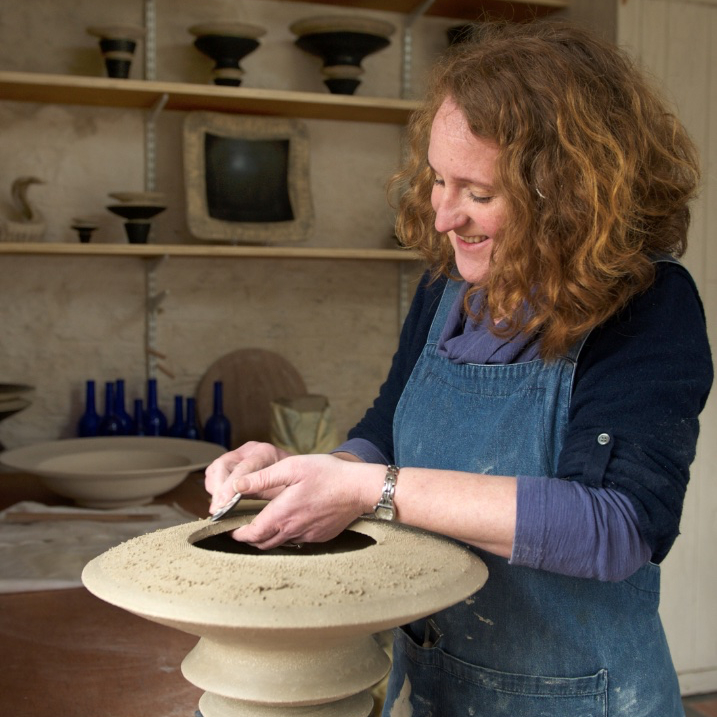 After teaching Ceramics for some years, I completed a Theory/ Practice MA in Applied Art and Visual Culture at the John Cass School of Art, London. For me this was an opportunity to examine the ‘language of things’ and, in particular, ceramic things. I established my own ceramics practice in 2001, and worked for thirteen years from Archway Ceramics, a group studio in a converted railway arch in East London. During this time I exhibited widely and, in Autumn 2003, was selected as a Professional Member of the Craft Potters’ Association. Alongside this I continued to fuel my interest in Applied Art Theory, teaching Museum Studies at London Metropolitan University, here examining the ways in which the meanings of objects can change as we move them through different environments... from home to museum or studio to gallery.

When potters talk about pots we use very anthropormorphic language. A pot has a foot, belly, neck, shoulder and lip. These very ‘human’ references describe something of the way we relate to pots. They reveal an ancient relationship between mankind and vessels, a notion of ‘pot’ that vibrates through every culture from the moment we first learned to shape mud with our hands.

My work is hand built, predominantly coiled and sits firmly within a Western tradition of Studio Ceramics which concerns itself almost exclusively with an exploration of the vessel form. This restricted cannon, far from being limiting, allows a great deal to be said. I think of my pots as feminine. In part this is the femininity of a form that exists to be filled and emptied, in part the intimacy of an object that is made for home, but mostly this is about the actual forms themselves. My notion of ‘belly’ is replaced with that of ‘corset’ and the heavy, grounded ‘foot’ that we find at the base of many pots is set ‘on point’ allowing each piece to lift away from the table in a moment of weightlessness. A pirouette.

In 2014 the needs of young children took me away from London to a rural life in Dorset. Here I work from my own Studio, a converted stable block, in an idyllic setting near Sherborne. Since moving here I have been selected to join a thriving collective, Making Dorset (which I currently lead) and elected as a Trustee for Dorset Visual Arts.